These tamales are soft, tender packets of ground corn, filled with sweet strawberry jam. Sweet tamales are very common and Mexico and this is a great introduction to them. The aroma of the tamales steaming is irresistible, and I like to serve them with a mug of Mexican hot chocolate or atole.

Why This Recipe Works

Sweet tamales are as popular in my house as savory ones. They are delicious as a dessert, breakfast, or a merienda (snack) with some atole and friends. They are both vegan and gluten-free!

During the 1870s, tamales became a symbol of Mexican culture and some people in the United States did not like what they represented. There were efforts to place bans on the sale of tamales in Los Angeles, CA, and San Antonio, but everything changed when the tamal was presented to the public at the 1893 Chicago Worlds Fair. After that, the tamal exploded into popularity in all of the metropolitan cities in the U.S.

Sweet tamales were just as prevalent in Pre-Columbian Mexico as savory ones. The Mexicas offered up different tamales for each of their different gods. Sweet tamales were offered to the god of life, death, and rebirth, Xipe Totec (zshi-pe toe-tek) or also known as The Night Drinker.

Masa Harina: Masa harina is corn flour that is made from ground field corn treated through a process called nixtamalization. In Mexico it is sometimes referred to as Maseca, which is the name of the most popular brand of corn flour there, However, I recommend you use Masabrosa or Masienda corn flour which are both free of GMO's.

Corn Husks: Dried corn husks are the primary vehicle for the tamales to be steamed and served. They are not edible but are readily available online or in most Mexican grocery stores.

Vegan Butter: Plant-based butter is a nondairy butter substitute that combines water with plant-derived oils, like avocado, coconut, palm, olive, or a combination of oils. I like to use Earth Balance, but if you want to make these without oil you can use 8 oz of unsweetened pumpkin puree.

How to Make Strawberry Tamales

5. Add half of the masa harina, baking powder, and salt to mixer and beat to incorporate.

6. Add half of the strawberry milk and beat again.

7. Repeat this process with the rest of the strawberry milk and masa harina. Add a couple drops of food coloring.

8. Beat until the masa is bright pink and the consistency of a thick cake batter.

9. Spread the masa on corn husks that have been previously soaked.

10. Place the strawberry jam in the center of the husk.

11. Fold the husk so the edges touch and fold over the filling.

12. Pour water in your steamer, add steamer insert and arrange your tamales. Steam for 40 minutes, or until the husk separates easily from the masa remove from the heat and let cool for 5 minutes.

If you would like to make these with fresh masa, replace the masa harina with 2 lbs. of fresh masa and use only 1 cup of almond milk. To substitute the fat you can use 8 oz. of coconut oil. For tamales without fat, substitute with 8 oz of cooked, unsweetened pumpkin.

Remove from the husks and serve warm right after steaming. For an extra decadent treat serve with vegan whipped cream.

Store tamales in an airtight container in the refrigerator for up to 6 days or store in the freezer for up to 6 months. To reheat them steam them again from frozen for about 10 minutes, place them in the microwave or place them right on a hot comal or skillet.

How long do you cook tamales for?

Tamales are steamed for 40 - 45 minutes or until the husk separates easily from the masa. They will still be very soft, so you might think they are not done, but they will firm up as they cool.

Do yo eat the corn husks on the tamales?

No, the corn husk is simply the wrapper for the tamales. Remove the husk and eat the tamal.

I also have recipes for chocolate tamales, potato adobo tamales, red chile jackfruit tamales, jalapeño and cheese tamales, and you can find more than 18 different tamales recipes both savory and sweet in my ebook Vegan Tamales Unwrapped. 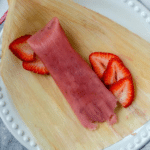 If you would like to make these with fresh masa, replace the masa harina with 2 lbs. of fresh masa and use only 1 cup of almond milk. To substitute the fat you can use 8 oz. of coconut oil. For tamales without fat, substitute with 8 oz of cooked, unsweetened pumpkin. 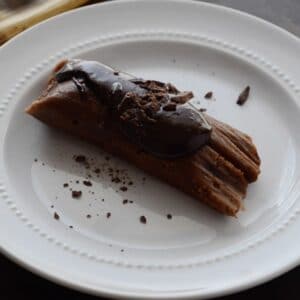 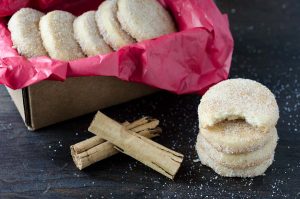 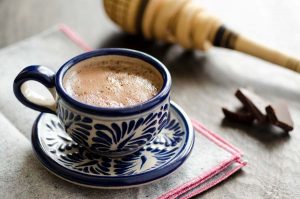 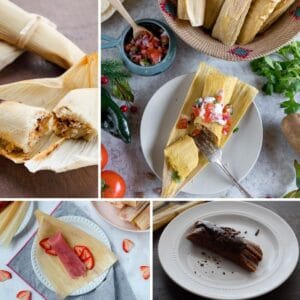 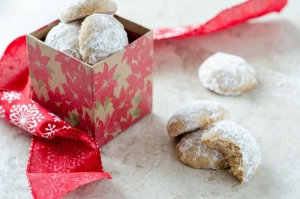 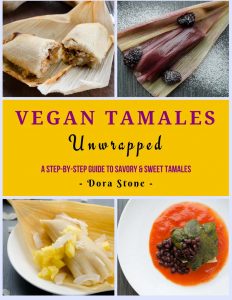