This vegan arroz con leche is creamy, delicious, and easy to make. It is topped with a sprinkle of freshly ground cinnamon and studded with raisins. I love it when it’s served cold on a hot day, but in the winter nothing beats a cup of warm arroz con leche. It's one of those classic Mexican desserts that you make over and over again. 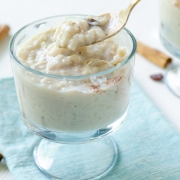 Save Recipe Go to Recipe Box
5 from 11 votes