I have been dreaming of this Mexican classic for months now, velvety, sweet, rich, and vegan cajeta envinada. It is simmered slowly on the stove until it reaches the perfect consistency, it is my favorite labor of love.

Cajeta is a traditional dish from the city of Celaya, Guanajuato. It is made by simmering goats milk with sugar, and baking soda, in a large copper pot, until it is the consistency of a dark caramel. For this vegan version I have used unsweetened soy milk, turbinado sugar

The first versions of cajeta or at least the technique was brought to Mexico by the Spanish conquistadores. (In Spain it is called leche quemada, and it is made with cow’s milk.) As with many other Mexican delicacies the Spanish techniques were adapted to the resources available in the area. Which in this case means that in the city of Celaya leche quemada was made with goat’s milk, and so cajeta was born.

To this day, cajeta is sold in a small round wooden box called cejete that is wrapped in white paper and bound with colorful cellophane ribbons. There are three versions of cajeta most commonly sold quemada, vanilla, and envinada.

What is Cajeta Envinada?

Cajeta envinada is cajeta with spirits added to it. You can add brandy, rum, or even whiskey. Even though “envinada” means ”with wine” it is more common to add spirits to it than wine.

Recipes made with Cajeta:

Cajeta is one of my favorite childhood candies and as a grown-up I love that it’s so versatile. You can use cajeta to make churros filled with cajeta, crepes topped with cajeta and pecans, obleas, as a topping for ice cream, to make flan, and many more delicious treats.

With this project, I am hoping to encourage the Mexican community in the U.S., and the people of my country to take a chance and make the change to a plant-based diet. This recipe, which is representing the state of Guanajuato, is the creation of me, Dora Stone. Even though I am not from Guanajuato, my great-grandfather immigrated to Mexico from Spain into Guanajuato, and that is where he met my great-grandmother, and started a family. Thus, I feel a certain connection to that area and was glad at the opportunity to veganize this recipe. 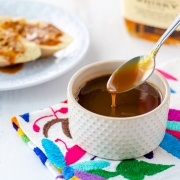 Save Recipe Go to Recipe Box
5 from 2 votes