Pozole is a hearty, spicy, satisfying Mexican soup. It is said to be a hangover cure, which I cannot confirm, but it is certainly a special occasion dish and is often served on Christmas and New Year's. There are three varieties most commonly served: rojo, verde y blanco. Traditionally pozole is made with pork shank, trotters, and shoulder, but of course, this will no longer work for us, so I have created this jackfruit vegan pozole rojo recipe just for you.

This is an adaptation of my grandmother's famous recipe. Every Christmas for as long as I can remember my grandmother would make two of the biggest pots of pozole and menudo I have ever seen. The adults would salivate over it, talk about how good it was going to be, and would go over to the kitchen and stir the pots to see how much longer it would be until they finally had their pozole.

One year I decided I was going to see what the big deal was, and I waited until the kitchen was empty. Then I went over to the pot and grabbed the ginormous ladle. I gave the whole thing a stir and almost fainted and threw up all over myself at the same time! (I must have been about 8 yrs. old.) When I stirred the pot a couple of pork trotters rose up to the surface and I swear I saw a pig snout, but I might have imagined that. After that, it took me years to give pozole a try, but I eventually became one of those salivating adults waiting for the pozole to be done each Christmas.

Now that I no longer eat meat it was only natural that I made a vegan version of this dish. Originally, I was going to make this with mushrooms instead of jackfruit, since I know jackfruit is not easily accessible to many. However, when I went to the grocery store I discovered that here in Hawaii button mushrooms are $8.00 a pound! I quickly decided instead to pay about $5 for two cans of green jackfruit. I am so happy with the result and I know you will be too. It is just as I remember it, so deeply satisfying.

I have used canned hominy to speed things up, but if you have access to dried hominy you can use that instead. (Dried hominy takes about 2 hours to cook.) Pozole is all about the toppings. Serve with dried oregano, diced white onion, lime wedges, sliced radishes, and shredded cabbage. My grandma used to serve a salsa macha on the side as well for the ones who wanted more heat. Here is a recipe from Mexico in my Kitchen that is very similar to my grandma's, only she used chile piquín instead of árbol. Enjoy! 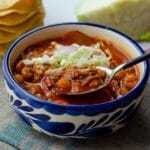 To remove the briny taste from the canned jackfruit you can simmer it in water, 1/2 onion, and  1 bay leaf for 10 min. Drain it, and squeeze out all the liquid. Now you can continue with the rest of the recipe. If you don’t have access to jackfruit you can use 2lbs. of mixed mushrooms or soy curls instead. You can substitute the zucchini with chayote with excellent results. If you like your pozole really spicy serve it with this salsa macha from Mexico in my Kitchen