Flan, silky creamy delicious vegan flan. This custard-like creation is one of the most recognized desserts in all of Latin America and my absolute favorite!!

Making this involved using an ingredient I had never used before. It’s become pretty common in the vegan community for making vegan flan, mousses, cheese, and gummies. The secret ingredient for this flan is a powder called agar agar.

What is Agar agar??

It is a semi-transparent powder derived from red/purple algae. It is the equivalent of vegan gelatin. As you know (or may not know) gelatin is made by prolonged boiling of skin, bones, and cartilage of animals. So since we don’t want to use that this, is where agar agar comes in to play.

How to use Agar agar?

. Be sure to buy the powdered version not the flakes for this recipe. You can use it just as you would powdered gelatin; you must place it in a liquid and heat it up to dissolve it. However, you can’t use agar agar in the same quantities as you would gelatin. Agar agar’s gelling properties are stronger than gelatin’s.

For this vegan flan recipe, I decided to go with a mixture of coconut milk and oat milk. Coconut milk provides the fat needed to make this creamy and rich. I added oat milk so it wouldn’t taste too much like coconut.

I used small ceramic ramekins (3.5 oz.), but you can use whatever container you have at hand since these are not going in the oven, like these aluminum ramekins. However, your container must be able to sustain heat since we will be pouring scorching hot caramel into them.

I like my flan thick and creamy ( as many of you expressed on my Instagram DMs), but there is another version of flan that is almost like a French crème caramel, very jiggly and delicate. If you want to make that version of flan, simply reduce the amount of agar-agar to 1 tsp. 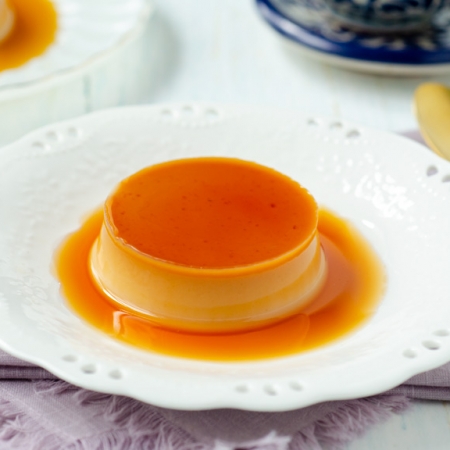 If you would like this flan to be yellow in color you can add ½ tsp. of turmeric, but this could affect the flavor.
If you want to make a very jiggly and delicate version of this flan (like crème caramel) simply reduce the amount of agar-agar to 1 tsp.