This sweet potato and chickpea stew combines sweet potatoes, yukon gold potatoes and chickpeas in a classic chile colorado sauce. The combination of chile ancho, chile guajillo, oregano, a pinch of cumin, and garlic add a smoky and savory flavor to the stew. This dish is inspired by a very northern dish called guisado de puerco in chile colorado. I have of course left out the pork and used a combination of potatoes and chickpeas. It is best served with rice, beans, and warm tortillas. 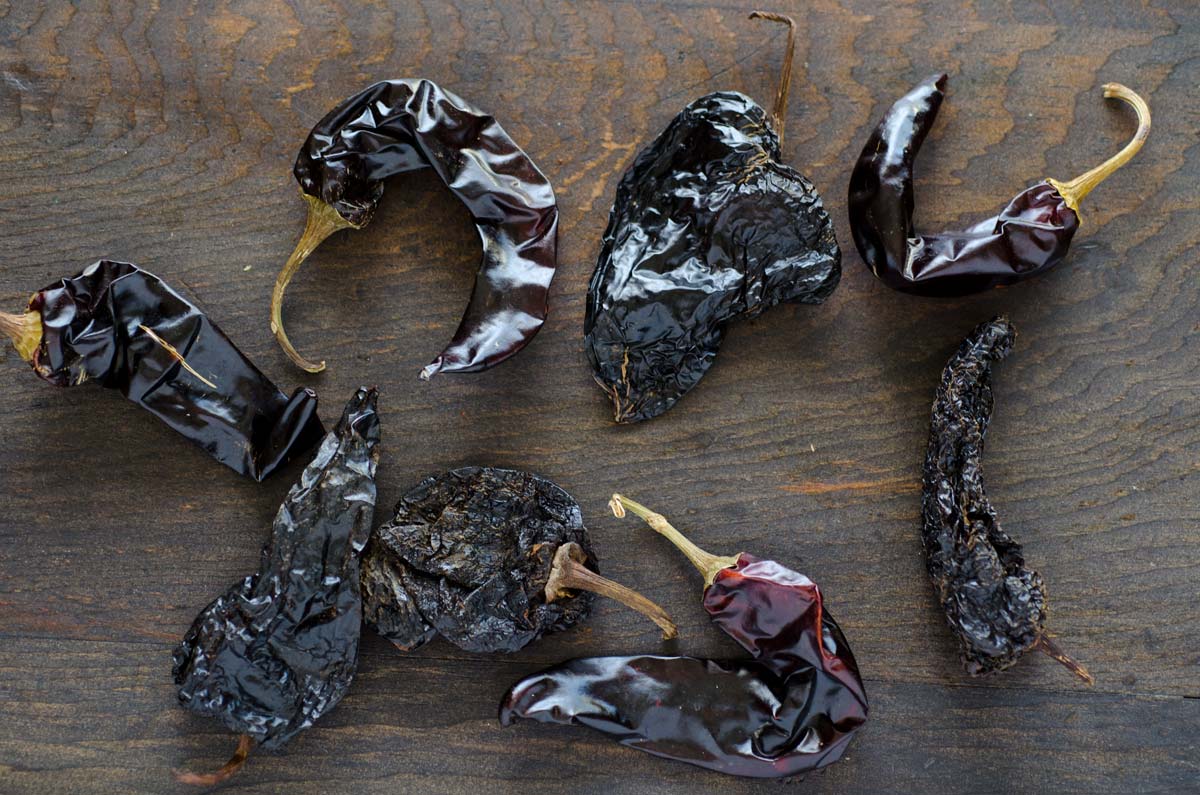 I know working with dried chiles can be intimidating at first, but it is quite easy. All you have to do is remove the stems and take out the seeds. They can be slightly toasted to bring out the smoky flavor of the chiles, but it is not necessary to do so. To use them you have to first reconstitute them in hot water. Simple drop the deseeded chiles in nearly boiling water and let them sit for about 10 minutes or until they are soft and pliable. They can be found in your local hispanic market or now most grocery stores carry them in their hispanic sections. 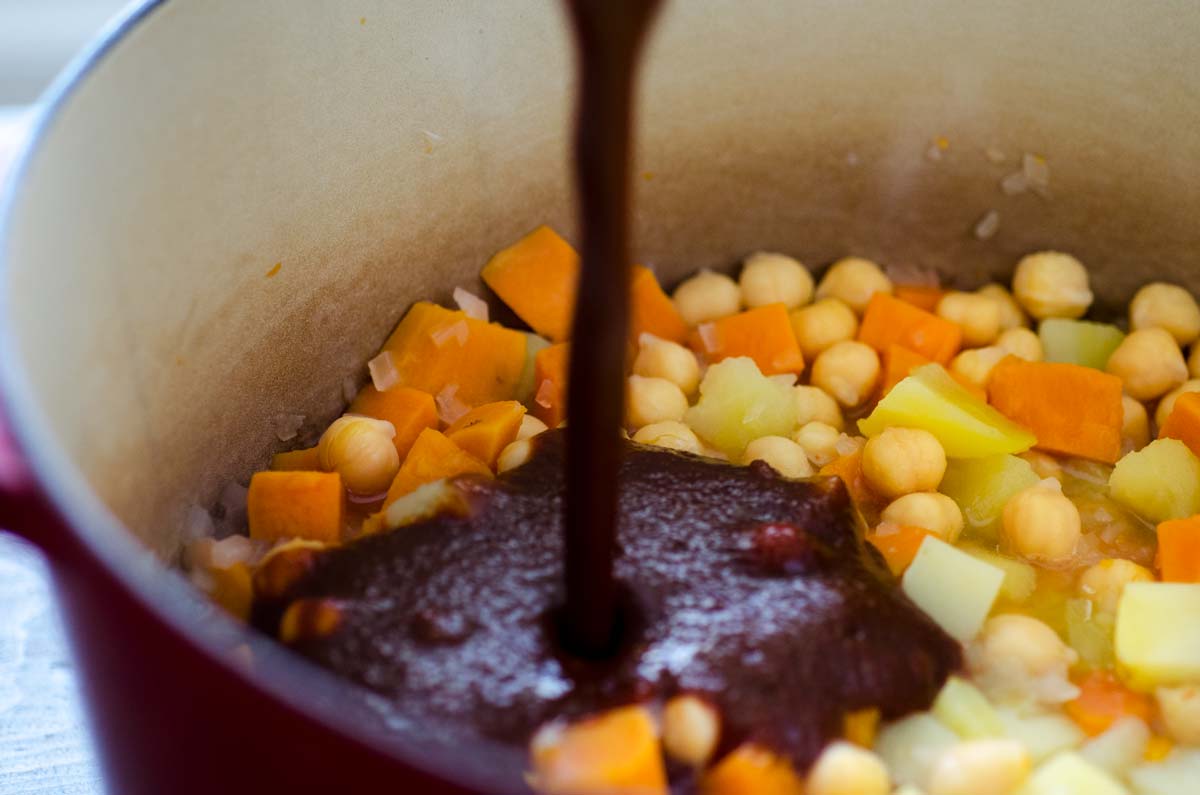 We have been in Hawaii 7 months now!! Can you believe it? I can’t. I think it has taken me this long to really appreciate the beauty of Hawaii, its people, and culture. We recently travelled to the Big Island for a small 3 day vacation.The Big Island is so different from Oahu, less crowded, but there are not as many restaurants and shops as Oahu.  We had the opportunity to stay at the Four Seasons Hualalai and it was amazing! We had been so stressed out with homeschooling, the blog, my husband working a ridiculous amount of hours, that this is just what we needed. The ambience at the hotel was completely peaceful and relaxing, the hotel itself is beautiful, and the restaurants quite good. The only thing that was disappointing is that they did not have many vegan options. Sometimes it can be such a drag to have to request special meals all the time, it would be nice if there was at least a couple of vegan options on the menu. We also celebrated our 8 year anniversary there, and got a babysitter so we could go out to dinner. It’s amazing how a couple of hours away from the kids, and the stress can put things into perspective. Hopefully one day we can visit another one the Hawaiian islands. 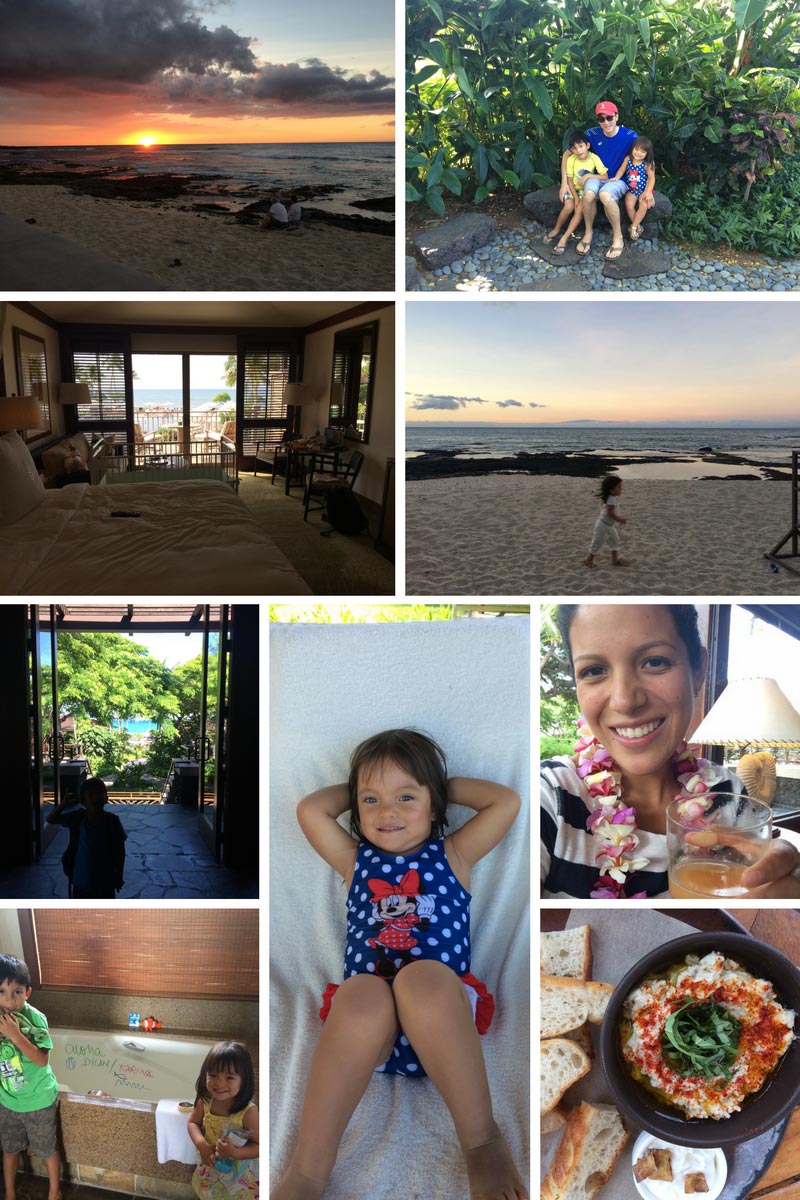 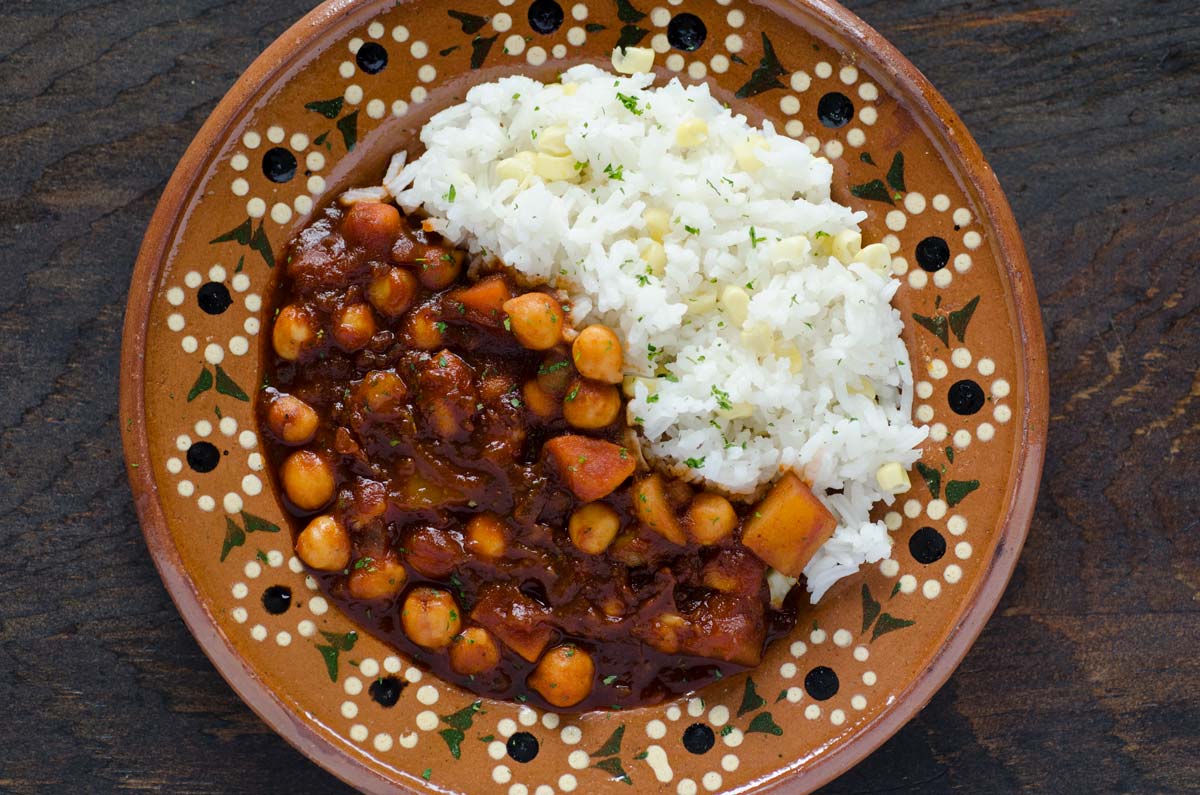 The Recipe: Sweet Potato and Chickpea Stew in Chile Colorado

Instead of sweet potatoes you could use russet, yukon gold or any other type of potato. The chickpeas could be substituted with any other bean. Cauliflower would also be a great addition to this dish. 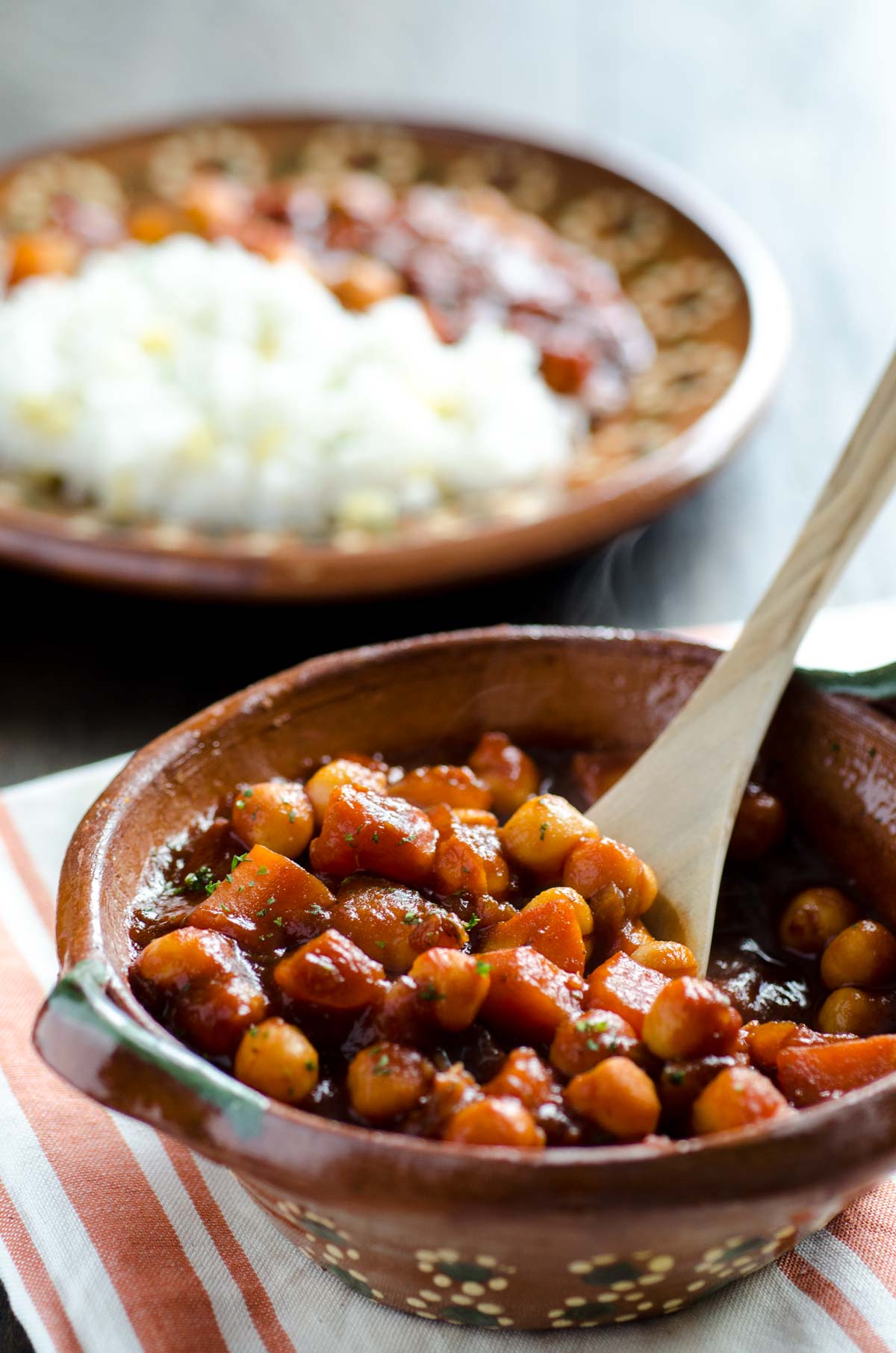 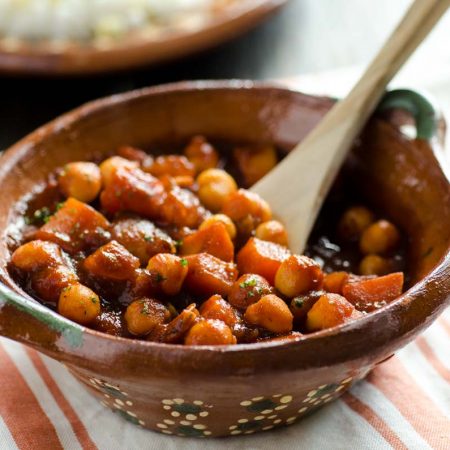 Pozole is a hearty, spicy, satisfying Mexican soup. It is said to be a hangover cure, which I cannot confirm, but it is certainly a special occasion dish and is often served on Christmas and New Year’s. There are three varieties most commonly served: rojo, verde y blanco. Traditionally pozole is made with pork shank, trotters and shoulder, but of course, this will no longer work for us, so I have created this jackfruit vegan pozole rojo recipe just for you. 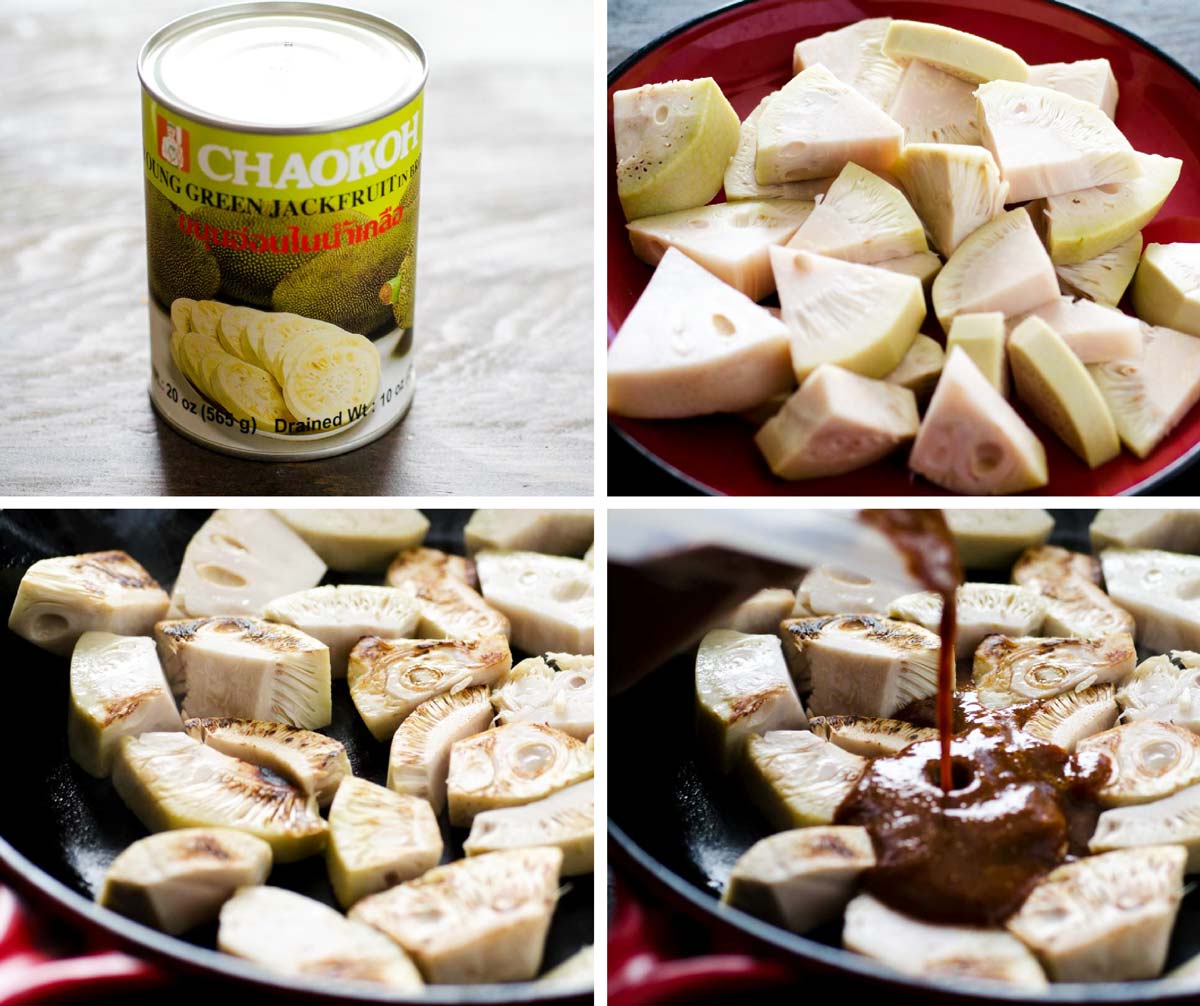 This is an adaptation of my grandmother’s famous recipe. Every Christmas for as long as I can remember my grandmother would make two of the biggest pots of pozole and menudo I have ever seen. The adults would salivate over it, talk about how good it was going to be, and would go over to the kitchen and stir the pots to see how much longer it would be until they finally had their pozole. One year I decided I was going to see what the big deal was, and I waited until the kitchen was empty. Then I went over to the pot and grabbed the ginormous ladle. I gave the whole thing a stir and almost fainted and threw up all over myself at the same time! (I must have been about 8 yrs. old.) When I stirred the pot a couple of pork trotters rose up to surface and I swear I saw a pig snout, but I might of imagined that. After that, it took me years to give pozole a try, but I eventually became one of those salivating adults waiting for the pozole to be done each Christmas. 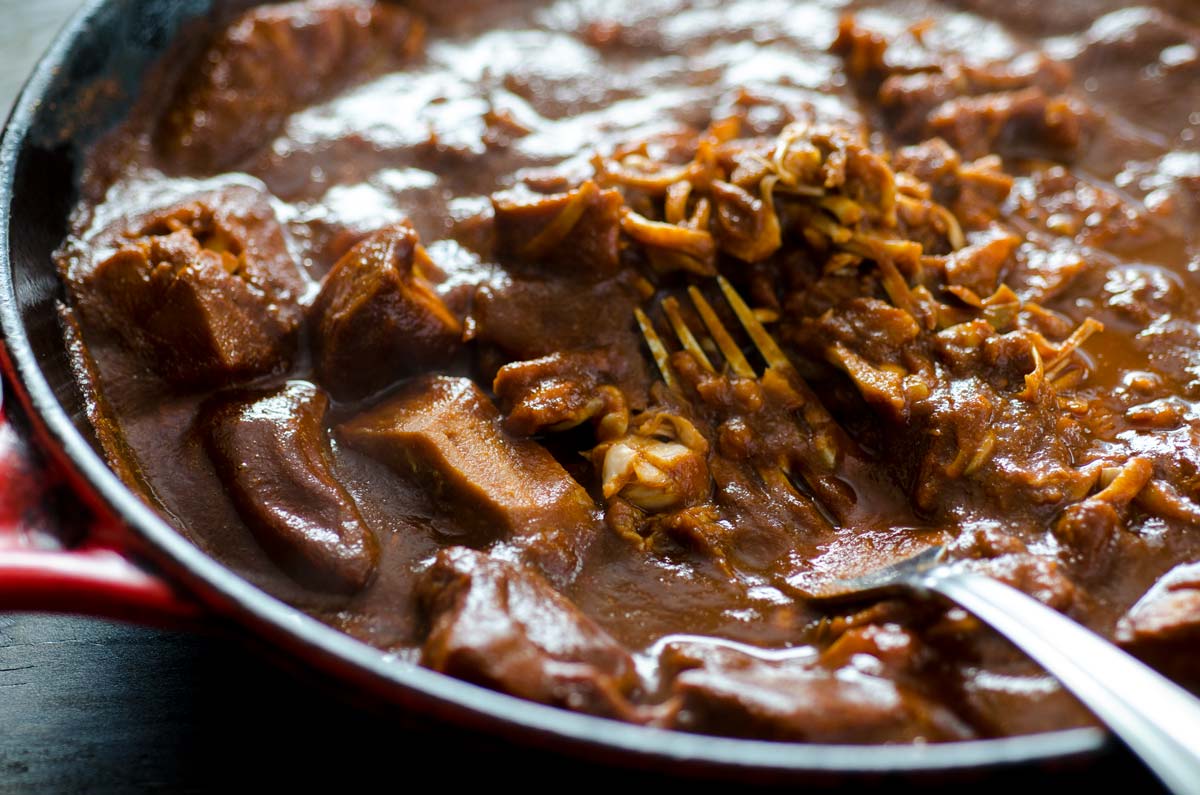 Now that I no longer eat meat it was only natural that I made a vegan version of this dish. Originally, I was going to make this with mushrooms instead of jackfruit, since I know jackfruit is not easily accesible to many. However, when I went to the grocery store I discovered that here in Hawaii button mushrooms are $8.00 a pound! I quickly decided instead to pay about $5 for two cans of green jackfruit. I am so happy with the result and I know you will be too. It is just as I remember it, so deeply satisfying.

I have used canned hominy to speed things up, but if you have access to dried hominy you can use that instead. (Dried hominy takes about 2 hours to cook.) Pozole is all about the toppings. Serve with dried oregano, diced white onion, lime wedges, sliced radishes, and shredded cabbage. My grandma used to serve a salsa macha on the side as well for the ones who wanted more heat. Here is a recipe from Mexico in my Kitchen that is very similar to my grandma’s, only she used chile piquín instead of árbol. Enjoy! 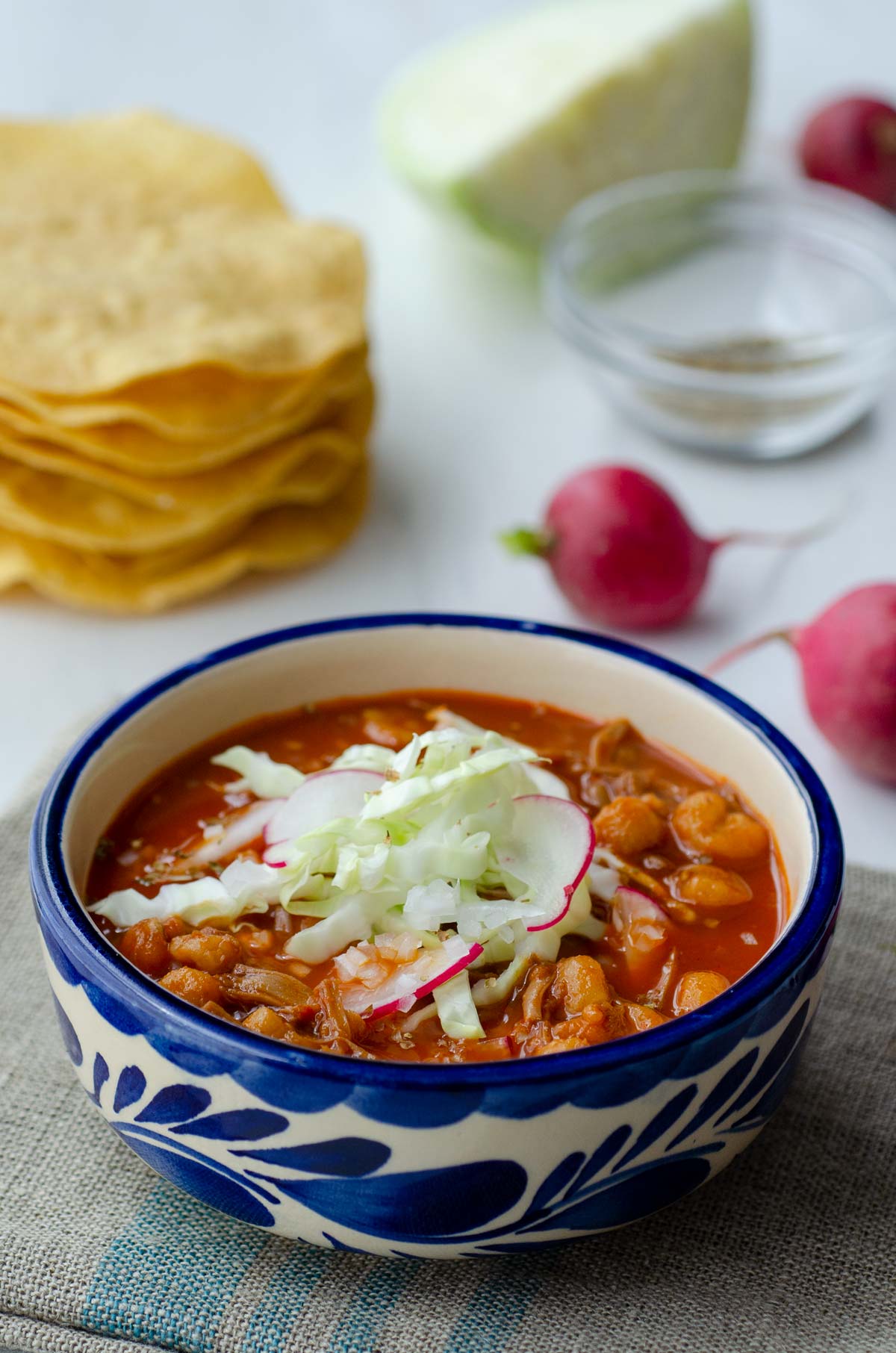