One of the greatest things about Christmas is tradition, making new ones and reliving old ones. Traditions are a simple way of transmitting our values and our culture, making us part of history, thus becoming the glue between the past and the present. Mexican culture has many Christmas traditions, they vary from family to family and region to region, but some of them transcend all differences and have been part of the culture for centuries.

Are part of a Roman Catholic tradition called a Novena, which in this case consists of 9 days of prayer prior to Christmas in order to obtain special graces. The passing of time and the jovial nature of the Mexican culture has transformed this tradition into 9 days of partying. Most posadas include pedir posada (reenacting the journey of Mary and Joseph trying to find a place in the Inn through song), a pastorela, the breaking of the piñata, and of course a small feast. 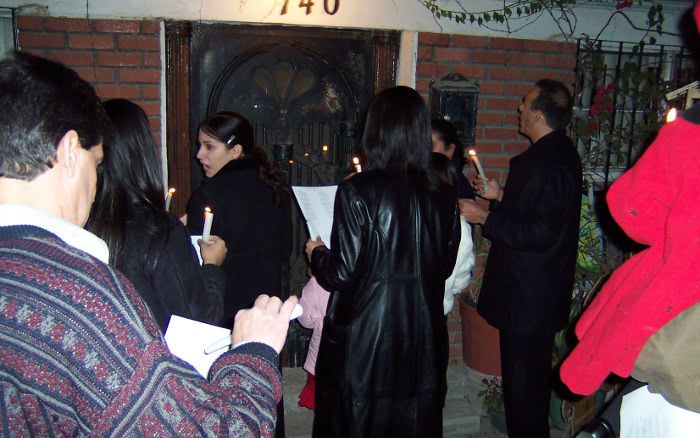 Are plays or artistic representations of the story of baby Jesus. They take place in the days before Christmas, at schools, churches, or outdoor settings. They were first introduced by the Spanish missionaries in the 1500’s as a means of teaching the faith and the bible to the Indians.

The basic plot of a pastorela consists of several shepherds that are on their way to adore baby Jesus, but are discouraged by Lucifer himself. All of Lucifer’s attempts to stop the shepherds from reaching their destination fail, and they are safely able to deliver their offerings to the Christ child. Over the years the plays have been adapted to modern culture, and are funny, full of song, dance, and creative costumes. (The town of Tepotzotlan, Edo. de Mexico is famous for its pastorelas.) 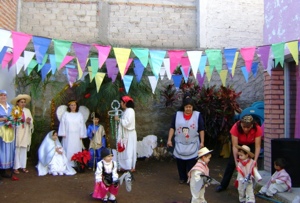 Is usually in the shape of a star with seven peaks, representing the 7 deadly sins. The person with the stick represents the faith, and the candy represents the temptation of evil. Pretty deep stuff! Even though the religious significance continues to get watered down through the years, the kids really enjoy it and some grown ups do too. 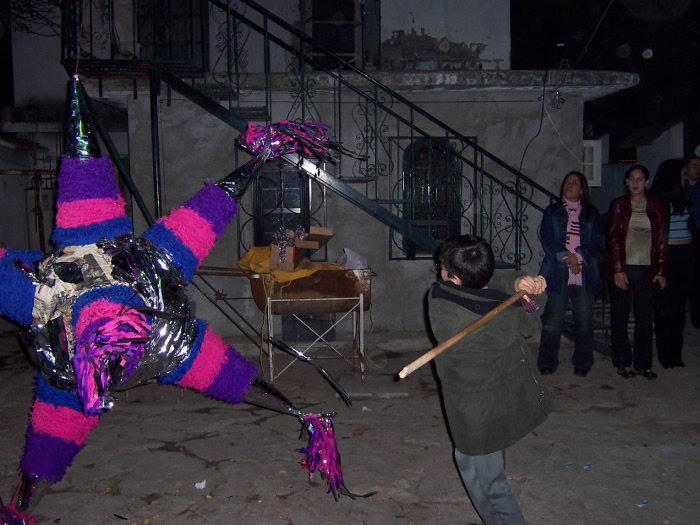 Nativities were also introduced by the Spanish missionaries, but their origin can be traced back to Italy around 1223, where St. Francis of Assisi recreated the nativity with people, animals, and a little house made of straw. The live nativity tradition caught on in Europe and later evolved into figurines in people’s homes. When the nativity was adapted by the indigenous people of Mexico, it transformed into a scene of vivid color, with dark skinned characters made with materials such as glass, silver, lead, wood, or wax.

Today, nativity scenes are rarely historically accurate. They are decorated with green shrubbery, cactus, and maguey; they can have figurines like the mail man, milk man, the baker, and even the devil; and the size of baby Jesus can sometimes border on the ridiculous. Baby Jesus can almost be as large as the Mary and Joseph figurines or very, very tiny. 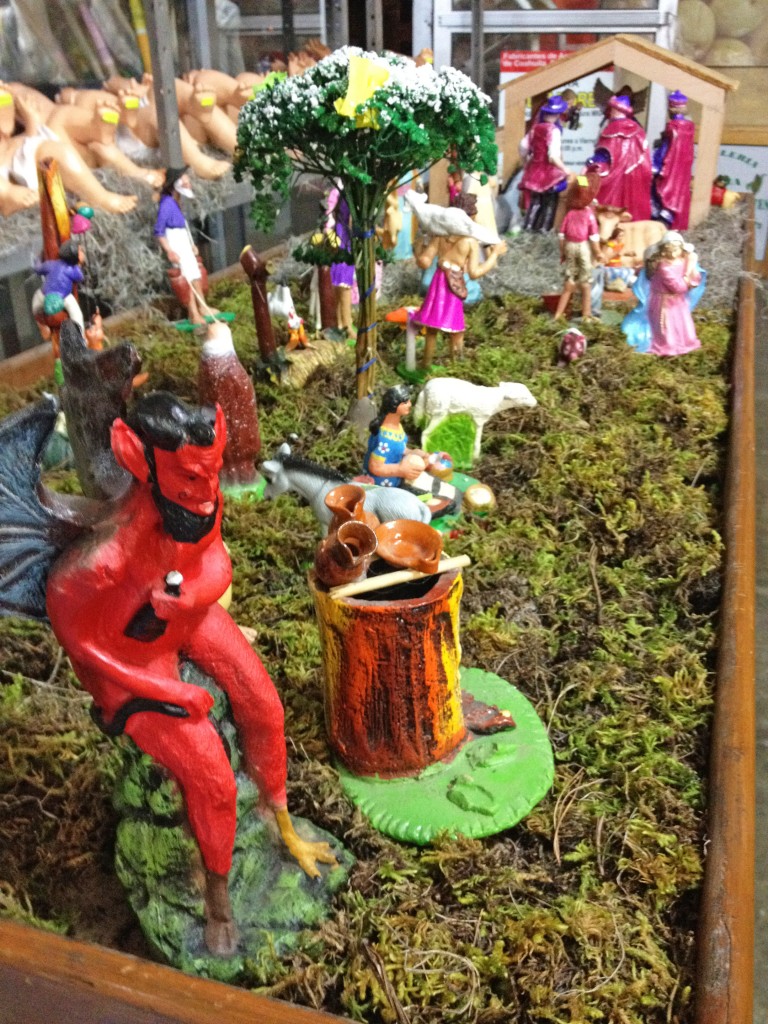 Christmas dinner in Mexico is usually celebrated on Christmas Eve, instead of Christmas day. Some families attend midnight mass, and some don't. It is on this night when a large figurine of baby Jesus is laid down to rest in the manger and everyone adores and celebrates his birth. The dinner differs from region to region, but in our case we have turkey, stuffing, mashed potatoes, tamales, pozole, menudo, ponche, and beer or wine. Dessert would be buñuelos or my Tia Laura's famous frozen cheesecake. 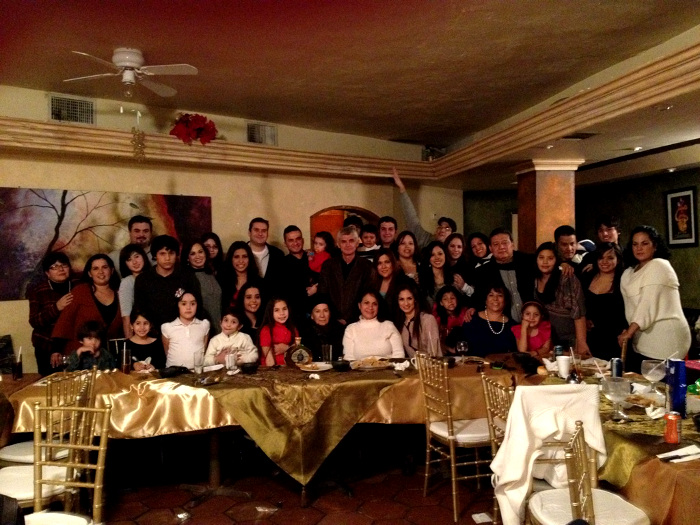 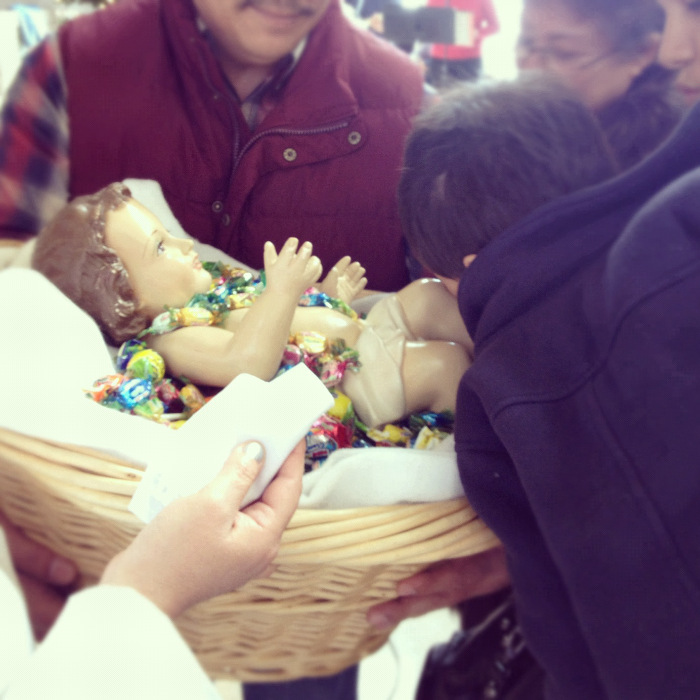 Fireworks came to Mexico in the 19th century and were used (and still are) for ceremony and religious purposes. For Christmas, churches will light them after midnight mass or families set them off in their back yards to celebrate the birth of Christ.

Dia de Reyes (The Feast of the Epiphany):

Santa is becoming more popular in Mexico, especially in the border towns, but most kids get their gifts in January 6th, on the feast of the Epiphany. Traditionally the children leave a note for the Magi in their shoes, the night before, and place them under the Christmas tree or outside. The Magi respond by bringing them gifts the following morning, just as they brought gifts to the Christ child.

The Feast of the Epiphany is also commemorated with a Rosca de Reyes, an orange and anise scented king cake topped with dried and candied fruit. The fruit is meant to represent the crown´s jewels, and inside the bread is hidden a small figurine of baby Jesus. The lucky person to find baby Jesus in their piece of bread is designated to bring tamales on Feb. 2nd to the Feast of the Candelaria, but that´s another story. 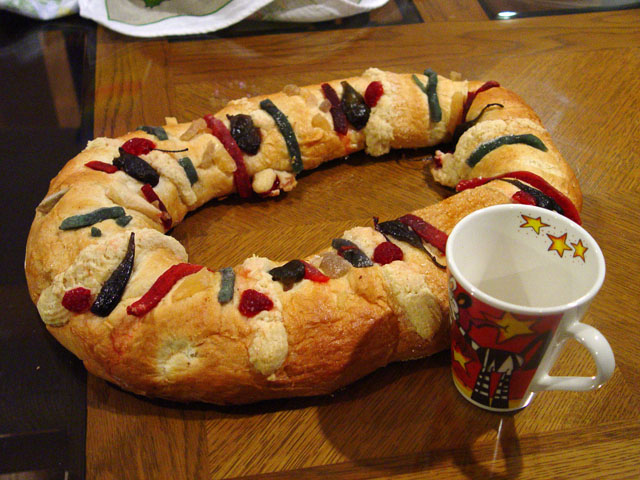 Tamales - Consist of seasoned corn dough (masa) filled with savory or sweet fillings, and wrapped in a corn husk or banana leaf and steamed. Their origin dates back to prehispanic times. The Aztecs, Mayans, Olmecas, and Toltecas prepared them for feasts and as a portable food.

Today they are still used in celebrations, such as Christmas. They are the ultimate comfort food for us Mexicans, well at least for me.
There are many variations, but in Coahuila, the state where I'm from, tamales are small, filled with shredded meat, seasoned with a salsa made with dried chiles, and wrapped in a corn husk.

Champurrado: Warm chocolate beverage thickened with corn flour or masa. It can also be flavored with anise, cinnamon, and vanilla. The best part of this drink is that it is made with Mexican chocolate. Mexican chocolate is basically cacao beans ground with sugar and cinnamon, this gives the champurrado a unique flavor that differs from American hot chocolate.

All these traditions are part of Mexico's rich culture. What are some some of your favorite Christmas traditions or foods?